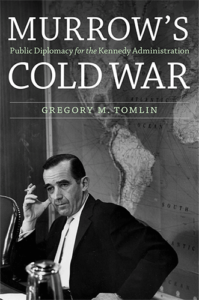 [F]For many Public Diplomacy practitioners, the three years that Edward R. Murrow headed the U.S. Information Agency represent the golden years, a time when Public Diplomacy was there at the take-off and not only at the crash landing, as Murrow famously said. The seat at the policy-decision table was not easily won, however, even for the likes of Murrow. Gregory Tomlin’s engrossing book takes us through this period with thorough research and interesting insights into the policies and events, both domestic and international, of the Kennedy Administration and the role of public information in the evolution of these events. The book is as much about USIA and the conduct of public diplomacy as about Murrow himself, and, in focusing on this period in Edward R. Murrow’s life, Tomlin addresses a fundamental question concerning Public Diplomacy, then as today: is Public Diplomacy a nice add-on or an important element in determining outcomes in the conduct of our foreign policy.

With an excellent introduction tracing the evolution of the USIA and the many debates surrounding the agency’s mission, effectiveness, and the overall value of considering foreign public opinion when determining policy, Tomlin sets the stage for Murrow’s arrival at USIA in 1960.  He examines this more rarely explored period in Murrow’s life, depicting the man and the professional, and paints an accessible picture of the often enigmatic Murrow. During his term as USIA director, Murrow is shown as interested not only in policy and programs, but also in the workings and people of his agency. At this time, most exchange programs were still with the State Department, and USIA’s core programs were in information (radio, film, and libraries, followed by TV). Tomlin expertly describes Murrow’s struggle to tell USIA’s own story so as to convince Washington of the value and contributions of its information activities, a task the author rightly judges as often more difficult than the effective global propaganda with which it was charged.

Tomlin masterfully presents the political backdrop of the momentous years of the Cold War, from Cuba to the Berlin Wall and Vietnam. He retells historical events vividly with enough but not overwhelming detail, facilitating the reader’s entry into the many and simultaneous challenges facing the Kennedy Administration and USIA. With numerous examples, Tomlin describes the potential and decisive game changers of public opinion that lead to policy change, and argues for the importance of getting public diplomacy right. Getting it right, Tomlin posits, includes bringing in PD early and the coordination among USG agencies that Murrow worked so hard to achieve. To demonstrate, Tomlin, contrasts two telling examples of when it works and when it doesn’t—the Bay of Pigs and Cuba Missile Crisis.

The author highlights several elements which Murrow insisted were essential to successful PD. The importance of understanding audiences through consistent research informed Murrow’s strong recommendation for the U.S. not to resume nuclear testing.  U.S. policy was caught between international public opinion that indicated fear of literal and figurative nuclear fallout and the need to show strength to domestic hardliners as well as to NATO allies who feared, in turn, that the U.S. capability might not be not strong enough in a stand-off with the USSR. The author describes the accompanying dilemma for the U.S. Information Agency as it worked to address both issues while still heeding one of Murrow’s primary tenets, that U.S. information be truthful.

The book often returns to Murrow’s deep understanding of the value of using the human dimension in successful Public Diplomacy. He grasped, perhaps like no other USIA director, that communication is furthered when one understands the interlocutor/audience and crafts a message in that context. He further understood the irreplaceable contribution that direct contact makes to this effort, giving rise to his perhaps Apocryphal comment that in effective persuasion, it’s the last three feet that counts. Our new “interconnectedness” through the Internet, and in Murrow’s day television, is no substitute. The human dimension infused USIA’s exploitation of the U.S. space program. Tomlin offers a captivating account of the origins of this effort and the mostly positive public opinion it garnered. These were also the heady days of the birth of USAID and Peace Corps. Murrow saw clear links between the missions of these two agencies and the USIA’s ability to project a better image of the U.S.

The author addresses the fundamental question of why the USG needs an information capability at all while we have CNN, a question as pertinent today as in Murrow’s time. Despite the increasingly media-rich environment, reaching new heights first through television and now with the Internet, it was not evident to everyone that the USG needed an energetic source of authoritative and trusted information in this mix of voices.  Tomlin rightly highlights the continuous struggle for adequate financing of the USG information effort in this increasingly competitive world of information dissemination. As Tomlin points out, already in Murrow’s time “the days were over when USIA films would draw thousands into commercial theaters.” The author presents illustrative examples of Murrow’s uphill battle with Congress, and his tremendous efforts to supplement USIA’s own meager resources by enlisting the help of the private sector. Murrow was forced to persuade a German printing press to print pamphlets about the Berlin Wall since the U.S. Air Force would transport them from the U.S. only if it was reimbursed.

Tomlin devotes a chapter to Murrow’s clear understanding of the lingering importance of race in America in presenting a credible image of the U.S. as the global megaphone for democracy and freedom. This domestic issue, ignored by many foreign-policy makers, dogged the USIA as much, if not more, than most foreign policy issues. Here again the author sheds new light on an issue largely ignored in Murrow biographies. Realizing that African diplomats considered the U.S. a “hardship post “given their treatment in the U.S. during the segregation years, Murrow understood immediately how much this tarnished the U.S.’s credentials in fighting the Communist system throughout the Cold War. Well exploited by Communist propagandists, images of racial strife in the U.S. quickly made it around the world.

Race in America continues to be an issue for our Public Diplomacy today—and not only in Africa—, and USIA’s film about segregation in the U.S., “The March,” still captivates embassy audiences worldwide. Criticized by many at the time, the film is one of many examples of Murrow’s quest for balance and insistence on the truth, as he realized that exclusively “positive” pictures of America would instantly be received as propaganda and thereby be counterproductive. Moreover, we learn that Murrow’s insistence on raising the issue with Kennedy was not simply one of good PR, but also a moral one for him. The author credits Murrow’s efforts with effecting the pace with which the Administration addressed civil rights and credits USIA and its information campaigns with Khrushchev’s realization that confrontation with the U.S. would not advance his goals in Latin America.

For many past and present PD practitioners, the challenges to Edward R. Murrow as director of USIA will read like déjà vu. They will recognize their own experience in Murrow’s struggles, as Public Diplomacy is often still held to a higher standard of proof of effectiveness than other foreign affairs activity, requiring investment of already limited time and resources.  And, Public Diplomacy too often remains an afterthought. Thanks to Tomlin’s detailed account of PD in Murrow’s day, it becomes apparent that, while tools must change with the time, Murrow’s principles of successful PD—gaining credibility by telling the truth and understanding audiences through direct contacts—stand and should be emulated still.

Tomlin offers a highly readable account of Edward R. Murrow’s role in a tumultuous time of U.S. political history and the development of America’s information dissemination capabilities. It will be of interest to professionals and the more casual reader alike. I highly recommend it.

Renee M.Earle is a retired Public Diplomacy Foreign Service Officer with the rank of Minister-Counselor. She served at our Embassies in Turkey, USSR/Russia, Kazakhstan, the Czech Republic, France, and the U.S. Mission to the European Union in Brussels. Domestic positions with the Department of State included Diplomat-in-Residence at Duke University in North Carolina, Acting Office Director of Public Diplomacy in the European Bureau, and Chief of the Central Asia Division of the Voice of America, where she directed the Pashto, Dari, Farsi, Uzbek, Azeri, and Turkish language services.

Wait a second to see the preview of the book …