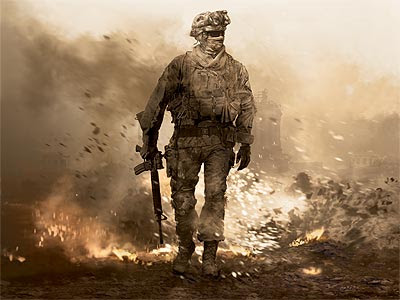 Lately I’ve run across a spate of kufiyas that are quite distinct from the hipster, the solidarity or the designer kufiyas. Kufiyas worn by military (Modern Warfare 2) or counter-terrorist ops (From Paris With Love). By a visionary tough-guy post-apocalyptic wanderer (The Book of Eli). And by the leader of a group of soldier dragon-hunting volunteers–also post-apocalypse (Reign of Fire).

I wish I had the time and money to play the video game Modern Warfare 2, it looks like a really incredible game. Yes, it’s all shoot-em-up, but just check it out if you doubt that it would be a hoot to play. The case for the game features a picture of a US military guy whose neck and face are wrapped with a kufiya. I didn’t see much kufiya action when I looked at the game previews, but the case seems to indicate it is a significant clothing item for some of the principals. Or at least a marketing mechanism. 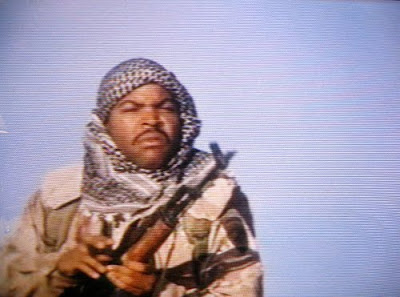 I’ve been told that the kufiya is standard wear for US Marines operating in Iraq. (As of today, they are out.) I hope to have a bit more data on current Marine usage soon. The kufiya was also adopted by US soldiers during the first Gulf War. Recall the character of Chief, played by Ice Cube, in the film The Three Kings–still the best film dealing with the 1990-91 war.
The kufiya is of course a handy item to have in the desert and sun, useful for shading oneself, keeping out the dust, achieving anonymity, etc. And it’s handy in the cold evenings as well. No surprise then that the British military have used them since at least the Second World War–using the name shemagh.
But besides the utility of the kufiya, there is also the fact that, by wearing an item iconically associated with the “bad guys,” the “hajjis,” US soldiers may hope to capture and mobilize some of the danger associated with the enemy and his ability to plant IEDs, as well as perhaps to tame it.
That seems to be what is going on with the military contractor team leader in the film The Hurt Locker, played by Ralph Fiennes. His wildness and recklessness seems to be signalled by the fact that he, and the rest of his crew, are garbed in kufiyas. In fact, when the EOD unit led by Sergeant James first sights the contractors, they think they are “hajjis” (i.e., Iraqi insurgents). This is entirely due to the fact the kufiyas wrapped around their faces. 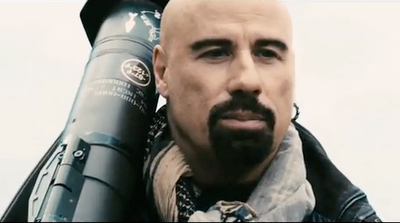 The upcoming film, From Paris with Love, which opens on February 5, stars John Travolta as FBI agent Charlie Wax, whose mission it is to stop a threatened terrorist attack on Paris. From the trailer, it’s clear that Agent Wax is another one of those cops or intelligent agents or soldiers so typical of Hollywood action movies, one who must use “unorthodox” methods–involving massive violence, machismo, over-the-top stunts, and borderline-insane schemes–to defeat the bad guys. Wax’s signature shaved head, leather jacket, goatee and kufiya are all essential stylistic elements that combine to signal that he is Dirty Harry for the twenty-tens. Looking through the various trailers and publicity photos for the film, I found it hard to find a scene where Travolta/Wax wasn’t in kufiya. 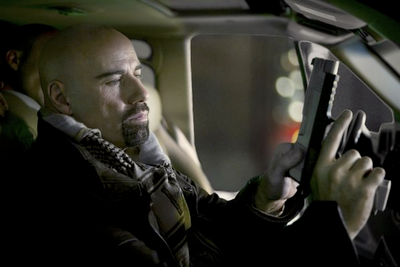 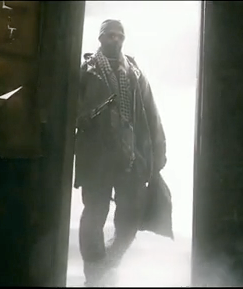 And then there is The Book of Eli, starring Denzel Washington as Eli, a wanderer through a post-apocalypse United States, who carries the Bible and is the master of all weapons. Although he is not always shown with a kufiya around his, he does wear it at many times, and so in this film too the kufiya functions as a sign of Eli’s toughness.

I’m told that there is a key scene involving the exchange of a kufiya for water. (The US has been turned into a parched wasteland.) The film has received quite mixed reviews, but for the sake of research, I do intend to see it.
You can view the trailer for the film here, at the official website.
And here’s another shot of the kufiya-garbed Eli:

And another image, from the cover of The Book of Eli comic book: 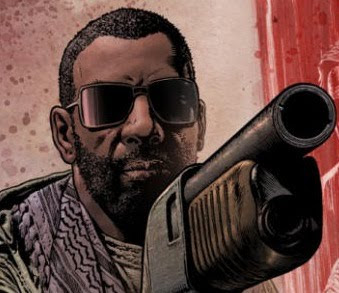 Finally, there is the 2002 film Reign of Fire, and the character of Denton Van Zan played by Matthew McConaughey. The year is 2020. Dragons have been brought to life, out of hibernation. They multiply and burn much of the earth. Humans respond with nukes, and the planet is virtually wiped out. 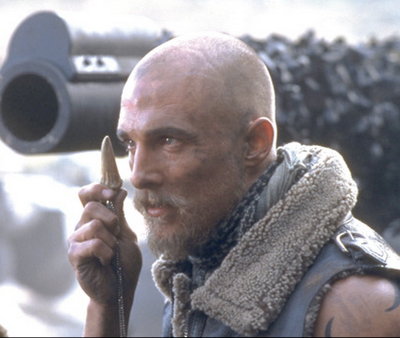 A band of heavily-armed volunteers from the US, led by Van Zan, arrives in England to aid a small group of survivors, headed by Quinn (Christian Bale). Van Zan is super-tough and battle-hardened, a true warrior. He has the attitude and demeanor of a Marine officer. He is bald, fully bearded, and his body is loaded with tattoos. And he is frequently seen wearing kufiya. Like the bald pate and the tattoos, the kufiya is key to Van Zan’s fierce, uncompromising, wild-man persona.
Below we see Van Zan in conversation with Alex (played by Izabella Scorupco), who is part of his military team.

Van Zan, true to his image, dies after the explosive charge he shoots at the dragon with his crossbow fails to kill the beast. Van Zan jumps off the high tower he is on, in a vain attempt to slay the dragon with a battle axe. He is bare-chested, showing off all his tattoos, having thrown off his sleeveless jacket and kufiya. His wild, suicidal yet noble gesture leads to his death. Alex and Quinn kill off the dragon and survive to re-establish human civilization.

Like all such wild men who break taboos and regulations and the rules of civilized behavior (the Geneva Conventions, for instance) to defend “us” against the terroristic enemy, Van Zan is not able to be domesticated. In such cases, the kufiya seems to function not just as a kind of talisman of the opponent, that lends potency to the action hero by a kind of sympathetic magic, but it seems to signify as well that he cannot be really assimilated comfortably into the society which he defends. Like Van Zan, the military contractor of The Hurt Locker played by Ralph Fiennes is killed, by the Iraqi insurgents. The character of Sgt. James, who also wears kufiya in the film–although it’s a khaki one, and hence more subdued kufiya than the contractor’s hajji-looking black-and-white checked shemagh. Nonetheless, at the end of the film, James is unable to re-enter civilian life. It’s just too dull and lacking in adrenaline rushes. He re-ups for another tour of “explosive ordinance disposal.”
I hope I’m not giving anything away when I tell you that Eli dies at the end of The Book of Eli. [P.S., May 15, 2011: Elyse just informed me that Eli wears a white galabiyya in the last scene. I didn’t remember that. He dies as a kind of devout Muslim???] And we can guess, based on our experience with all the Dirty Harrys and the John McClanes (Die Hard series) and the Martin Riggs’ (Lethal Weapon series), that Agent Wax does not get happily married and go off to live peacefully in the suburbs, at the end of From Paris with Love.