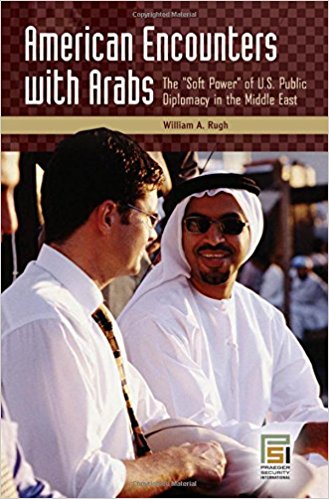 For sixty years, U.S. government officials have conducted public diplomacy programs to try to reach Arab public opinion–to inform, educate, and understand Arab attitudes. American public affairs officers have met serious challenges in the past, but Arab public criticism of the United States has reached unprecedented levels since September 11, 2001. Polls show that much of the negative opinion of the United States, especially in the Middle East, can be traced to dissatisfaction with U.S. foreign policy. Rugh, a retired career Foreign Service officer who twice served as ambassador to countries in the region, explains how U.S. government officials have dealt with key problem issues over the years, and he recommends ways that public diplomacy can better support and enhance U.S. national interests in the Middle East. This struggle for the hearts and minds of the Arab world, so crucial to the success of American efforts in post-occupation Iraq, is carried out through broadcasting, cultural contacts, and educational and professional exchanges.

Rugh describes the difference between public diplomacy and propaganda. He points out that public diplomacy uses open means of communication and is truthful. Its four main components are explaining U.S. foreign policy to foreign publics; presenting them with a fair and balanced picture of American society, culture, and institutions; promoting mutual understanding; and advising U.S. policy makers on foreign attitudes. Public diplomacy supports the traditional diplomatic functions of official business between governments. Whereas diplomats from the United States deal with diplomats of foreign governments, public affairs officers deal with opinion leaders such as media editors, reporters, academics, student leaders, and prominent intellectuals and cultural personalities. Rugh provides an up-close-and-personal look at how public affairs officers do their jobs, how they used innovation in their efforts to meet the challenges of the past, and how they continue to do so in the post-September 11 era.

In his most recent book on public diplomacy in the Arab world, William Rugh draws on his more than three decades of service with the U.S. Information Agency (USIA) to explain the successes and failures of America’s effort and recommend policies to remedy the shortcoming that emerged following the Sept. 11 attacks. The attacks and the subsequent “war on terror” forced a reassessment in U.S. diplomatic circles of how the Arab world perceives America and what can be done to improve its rapidly deteriorating image, and American Encounters with Arabs is a solid first step. The subtitle, The “Soft Power” of U.S. Public Diplomacy in the Middle East, sums up his argument about the power of perception and the need to devote resources to cultivate effective public diplomacy. Drawing on oral histories of U.S. Public Affairs Officers (PAOs) attached to embassies in Arab countries, the book discusses how public diplomacy extends far beyond traditional PR-style activities such as broadcasting and interfacing with the media to include personal contacts, student exchanges and cultural activities as an integral part of its strategy. PAOs are America’s front-line practitioners of “public diplomacy,” a term popularized by the USIA (whose functions were taken over by the State Department in 1999) to refer to contacts between government and foreign audiences meant to advance American interests.

Working chronologically, chapter by chapter, through administrations from Harry S. Truman to George W. Bush, Rugh describes the arguments PAOs have deployed to explain U.S. policies and encourage goodwill towards American society. Drawing on oral history interviews and his personal experience, Rugh describes the relationships built between PAOs and hostile local journalists that eventually succeeded in moderating anti-American coverage.  But the overall picture he paints of American public diplomacy through the decades is one of initial Arab goodwill that was slowly eroded by America’s tilt towards Israel until finally being obliterated by George W. Bush’s declaration of a “global war on terror” and invasion of Iraq.

American Encounters is most compelling in describing how increasing U.S.-Arab hostility impeded cultural exchange programs and other efforts to promote goodwill and understanding. Security concerns and soured relationships, particularly after Sept. 11, made American missions in the Arab world turn inward, throw up walls and sever opportunities for personal interactions.  Tightened immigration restrictions hampered the State Department’s ability to give scholarships to Arab students or to arrange travel to America for influential individuals. Libraries once run by Americans eager to share their country’s language and literature with Arab readers were shuttered and replaced with un-staffed “American Corners,” an ornamental name for what amounted to displays of books and periodicals set up in public buildings and offering no opportunity for interpersonal interaction.

Although partly conceived as a study of the relationship between U.S. foreign policy and Arab public opinion, American Encounters reads most like a history and post-Sept. 11 defense of America’s public diplomacy practitioners from World War II to the present.  Rugh paints a detailed and sympathetic picture of those performing the often unenviable task of defending American policy in the Arab world.  The book falls short, however, in its conception and presentation of Arab public opinion, often offering generalities in place of more finely-grained analysis of trends at the national or sub-national levels.

While Rugh offers a nuanced picture of American public diplomacy tactics, at times he resorts to sweeping generalizations of Arab opinions, occasionally resorting to explanations based on cultural stereotypes:

“When ‘Bush 43’ was inaugurated in January 2001, most Arabs assumed that his foreign policies relating to the Middle East would closely resemble those of his father….They expected Bush 43 to correct  [the U.S. tilt towards Israel] and listen more to their interests because his father had done so.  In Arab society, sons tend to heed their fathers’ advice.”  (148)

Reconstructing a detailed picture of the historical trajectory of Arab public opinion is not an easy task due to sketchy or nonexistent polling data for much of the time period covered, although Rugh incorporates what recent polling data is available about Arab perspectives on America. Nevertheless, large gaps remain that might have been filled using information from Arabic newspapers, political pamphlets, or other historical documents.  Given how new the field of public diplomacy study is, however, this quibble underscores the need for more serious works, like this one, that critically analyze U.S.-Arab relations, past and present.

Rugh concludes the book with a set of sensible policy recommendations aimed at revitalizing America’s public diplomacy in the Middle East, specifically reestablishing some of the programs that were cut due to security concerns and increasing participation in U.S.-funded Arabic broadcasts.  He also makes a convincing case for further study of America’s public diplomacy efforts, and the need to recognize the power of image and perception to shape political realities.  At the end of the day, however, public diplomacy will always be secondary to the foreign policies themselves and unlimited spending on public diplomacy will not likely reverse the deep damage done to America’s standing in the Arab world.  Nonetheless, readers of American Encounters will be heartened by the reminder that —regardless of the administration or specific policy—there remain elements in the U.S. foreign policy establishment dedicated to engaging with Arab audiences and keeping avenues of communication open.

Will Ward graduated from the University of Pennsylvania in 2005 and is working towards an M.Phil in Modern Middle Eastern Studies at St. Antony’s College, Oxford.