Voted the “best gastronomic destination in the world” in 2012 by the World Travel Awards, Peru has definitely been playing the gastro-diplomatic game. Raul Matt, a Peruvian sociologist and post-doctorate researcher at the IRD, deciphered this concept for us in the framework of the ANR FoodHerit project.

In the past couple of years, there has been a lot of talk about the Peruvian gastronomic boom, but what does this mean exactly? That there are more chefs? More restaurants? More culinary schools?
Peruvians have always enjoyed going out for dinner, even if just for a piece of chicken or a plate of ceviche (editor’s note: marinated fish). And there have always been very good restaurants and a rich street-food culture. But today, there are restaurant rankings, publications specialized in food, blogs…It should also be pointed out that in the 80’s, the economic and political situation was such that we had other more important things to think about than food. But then in the 2000’s, many Peruvian cooks from higher social classes returned to the homeland after having trained in the best European culinary schools. This phenomenon contributed to the emergence of great chefs, including the famous Gaston Acurio, who is sort of the pioneer of this culinary trend. Consequently, we began questionning our culinary heritage more and more,  became hyper-aware of aesthetics and more sensitive to presentation, hygiene, the way produce is treated, the origin of ingredients…

Is this ‘Peruvian gastronomy’ a trend or a social reality?
In the big cities and particularly in Lima, the phenomenon is real. The numbers speak for themselves: a third of the population lives in the capital and that is also where people have the most financial means. The trend has spread to the touristy areas, like Cuzco. There are very good restaurants in other areas but they are not listed and are mostly popular local restaurants that we pass around between foodies. But yes, everyone is constantly talking about food in Peru. And young people especially are more and more interested in becoming cooks.

So it has become a legitimate job?
It used to be seen as a servant’s job and was associated with the help in wealthy homes, which is still quite a common practice in Peru today. And in such a chauvinist country, feminine chores weren’t really ever considered real jobs. And then great chefs began to travel and buy restaurants in Peru, and the profession was elevated. Today, chefs are also businessmen; they present themselves well. Which is in fact an issue for cultural endogamie. Indeed, the chef now looks like his clients, and is thus breaking away from his image as a servant to the wealthy.

Gastronomy also means reinvention. That’s the case in Peru, right?
No, our cuisine hasn’t really changed much. It’s more that chefs today use more Peruvian ingredients, have rediscovered our biodiversity and use it differently. But how authentic is it really? This question makes me think of Noma’s chef René Redzepi, and all his work with local ingredients. Was his cuisine really the birth of Danish gastronomy or the simple creation of a brilliant chef? I would say that there has been a gastronomic boom in Peru rather than the emergence of Peruvian gastronomy… 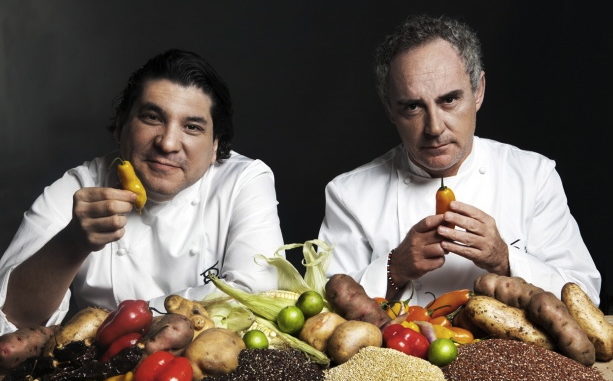 Nevertheless, the government is definitely playing up its cuisine in order to exist on the international circuit, which you call “gastro-diplomacy”. What is the strategy there?
Let’s just say that gastronomy is just one of the elements within a larger concept that is cultural diplomacy. Of course, when there are official receptions, the government makes sure to present an extremely high-quality Peruvian menu. But it goes further than that: today, each country has to cultivate its brand. (Editor’s note: see France in the luxury industry). We attract tourism and investors by giving off a friendly image. And a country’s cuisine contributes enormously to the construction of this image; it’s a very positive vector. It also unites people from different regions and social classes, resulting in a melting pot; and thus cuisine can give off the image of a harmonious country, even if that is far from the truth.  For example, the government showed a film with a strong social interpretation that promoted its national cuisine in front of the International Chamber of Commerce in Washington. Meanwhile, Peru remains a country where segregation is widespread. And they showed a film that told the tale of a Peruvian chef travelling from Nebraska to the United States in order to promote their cuisine.

Is it also a vector of development for the government?
Yes, it also presents opportunities to reduce the gap between the city and the countryside, favor short-circuits and bring chefs closer to the producers, in the “regional French products” way. It is going to work? That remains to be proved. There are also culinary schools founded by Gaston Acurio that are practically free, where young underprivileged kids are given the opportunity to pursue their education…The students in this program are utterly convinced that their global mission is to have the world discover Peruvian cuisine, and even compete with Italian and French cuisine! Once again, we are mixing gastronomy, entrepreneurialship and society.

Is there another country in Latin America that is using the same strategy?
No, Brazil has some very good restaurants, but it doesn’t use the notion of “culinary nationalism” in such an obvious manner. Colombia is more engaged in this effort to patrimonialize its popular cuisine. Mexico on the other hand had been playing this game for a long time; it was the first country to export its cuisine, but it did so via immigration. In reality, Peru would love to be like a second Mexico, but in a concerted way.

Don’t you run the risk of “freezing” Peruvian cuisine by wanting to export it?
Since we are at the beginning of its rediscovery, the risk is minimal. No, the tendency is rather to make it comply with global standards. But one thing is for sure; Peru is convinced that it excels in this domain. And that they can bet on cuisine more than on music or sports.

Since Peru has been politically resistant to the United States for years, should we be seeing in this a form of counter-offensive towards the impregnation of North American culture?
No, I don’t think so…On the food front, we are unfortunately very receptive to junk food and don’t need American fast foods to eat poorly!